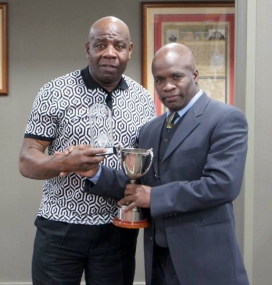 Last season was a year for Ian Higgins, the man had been runner up in the Order of Merit on several occasions but 2017 was the year he finally got his reward.

Our membership remains strong, members come and go but consistently we maintain on average around the 40 to 45 mark. We understand that golf isn’t a priority for most so players will come and go but we appreciate the effort everyone makes in attending our events.

The competition in 2017 was as fierce as always, CGS players don’t mess about they work on their games during the off season and are ready to fire when the first event comes around. The opening event of 2017 was at Longcliffe Golf Club in Leicestershire and the winner that day was Dale Bromfield who secured his second CGS title in as many years. Up next was our annual founder’s day event held on Good Friday every year to remember the day we started the society back in 2007. The event was held at Pype Hayes Golf Club a local municipal, a venue many of us grooved our games over the years, the event was won by Martin Chidgey, who with a net 59 beat the second place man by 9 shots, it was the largest winning margin in founder’s day history. No sooner had the Founders Day finished it was onto the 2nd Major event of the season at Walsall Golf Club for the Captains Trophy. The winner at Walsall and with his first win since Hatchford Brook in 2007 was Clyde Pile, it was a long coming for Clyde!

It’s already now May and we visited Lingdale for the Chairman’s Trophy. It was a CGS first at Lingdale a course that was well received, it was tough but fair. It was a first win for Chris Powell who scored 37 points to beat 2nd place man by 4 points.

With the season in full swing the CGS traveled to Olton Golf Club, another first for the Society and up for grabs was the Caricom Cup. On the day Ian Higgins was the man in form, it was a win that would kick-start his challenge to the Order of Merit.

Heading into the back nine of our season the venue of choice was The Worcestershire Golf Club for the Secretary’s Shield. On the day it was CGS Chairman Junior Harris who submitted his charge for the Order of Merit Crown with a 3 point victory from fellow Order of Merit challenger Dave Brown.

Onwards to the Menzies Welcome in Stratford where Keith Salmon took the Players Trophy with a two point victory from Junior Harris.

With all those now in contention for the player of the season the pressure was starting to tell. The next Major at Little Lakes for the TNCM Trophy was won by Trevor Lammy with Chairman Junior Harris having a bad day falling out of the events top ten and failing to make any head row to his Order of Merit points tally and to the two Order of Merit front runners Dave Brown and Ian Higgins with the former coming in third on the Lakes course.

As it stood going into the final major of the season it was Ian Higgins, Dave Brown Junior Harris and coming in from way outside Roan McLeod who mathematically still had a chance to lift the Order of Merit Crown.

The final major of the season was our two day event for the Charley Sifford Memorial Trophy which was held at the Portal McDonald complex in Cheshire. The Championship and the Premier courses would decide the CGS title for Champion Golfer and Order of Merit Champion for 2017.

The condition of the Championship course on the first day didn’t provide the excitement we were all hoping for but Ian Higgins firmly put his stamp on the title with the first day lead followed by Roan McLeod who put in a challenge early on but faded towards the end leaving a lot of ground to make up on the final day. Both Dave Brown and Junior Harris also made things difficult for themselves with poor starts to the weekend.

The second day on the Premier course was better received by the players, Mary Riley posted the best score of the second day but it was Ian Higgins who’s combined two day score was enough to win the Charley Sifford Memorial Trophy and also was enough to secure his first Order of Merit title, having been runner up for so many years.

To celebrate another successful season the CGS held its Presentation Dinner & Dance once again in the Richardson Suite at the West Bromwich Albion Football Ground. It was a night of celebration for all the seasons’ event winners and especially for Ian Higgins who received his Order of Merit trophy and gave an entertaining speech. As usual it wasn’t just about Golf the CGS always tries to help our designated charities and on this occasion was no different. With our usual raffle on the night and funds raised from several other avenues used to help raise charitable funds the CGS was able to donate a cheque for over £500 pounds to Sickle Cell Wolverhampton.

Thanks to all those who attended the night at the Albion, thanks to Don Campbell for his presentation on the progress of the TNCM (The National Caribbean Memorial) for service men and women from the Caribbean Islands who fought for Great Britain during 1st and 2nd World Wars.

Thanks to our entertainers on the night DJ Stereo Master with Father Blacka, Vivian Jones and from comedian Mr Cee.

The committee must acknowledge it’s an effort to put these events on every year especially our end of season presentation. We all love playing golf but when the golf is over we must give back a little of our time and come together for other reasons, remember the night isn’t as long as a day’s golf but the result will last a lot longer.