Lloyd Thomas is the Champion of Champions 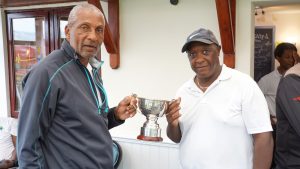 Once every two years the CGS holds its Champion of Champions event, its an event which hosts all the previous major winners. The winner of the event is crowned the Champion of Champions. Unlike our regular major events which are based on the Stableford scoring format this event is based on the Medal scoring format so every shot counts. With the range of handicaps in attendance it would be expected to see some high numbers and this was the case with several ten’s being posted by some players.

The venue for this years event was Cleobury Mortimer Golf Club located on the Shropshire and Worcestershire border. On arrival the main issue was the weather, it was raining constantly and some wanted to cancel and others were keen to get going. The sky was overcast and the rain wasn’t stopping, it wasn’t looking good. The green staff along with the head pro, went out and inspected the greens, they said a couple on the back nine were flooded but with some work to clear the excess water they could be playable by the time we get to them. Some of us were saying we either go or we cancel, in the end there was a break in the weather and we decided to play. Considering what the weather was like on arrival we could never have thought the play would go ahead but it did and when the sun came out we were all glad we did. Throughout the day we weren’t completely rain free there were occasions when the rain returned but we managed to complete the event and crown the Champion of Champions.

With net scores ranging from 91 to 69 the scoring wasn’t great but we could argue that the conditions may have played a part however the winner scoring net 69 was able to keep it together and win by a shot from the second place score of net 70 which came from Tony Sealey with Ian Higgins coming in third with a net 74, which included three birdies. None could stop the eventual winner with a net 69 playing some solid golf was Lloyd Thomas, who has been with the CGS from its early beginnings. Congratulations to Lloyd Thomas on being crowned the Champion of Champions.

« Junior shows age is nothing but a number!
Chris goes to the Top of the Order with his 2nd win of the season »