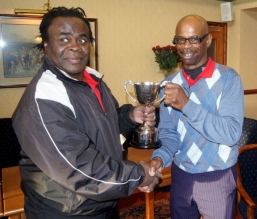 The CGS started the 2015 season by travelling down to Leicestershire to play Longcliffe Golf Club, a course that was well received by the players. With many courses soft under-feet and a little wet in places Longcliffe provided dry fairways. The only issue faced was with the greens which were difficult to read due to unevenness from the many footsteps on the soft surface; however all-in-all the course was in great shape and one to return to in the summer months.

It was a strong field of 32 members and guests all fully refreshed after the winter break and raring to start the new season with victory in the first major.

Among the 32 players was past member Winston White who as returned to the CGS after several years absence, welcome back Winston. Also in attendance were guests James Sandiford and Norman Keller both have been looking forward to the day and will become members before the next major, welcome aboard, I’m sure you’ll enjoy your time with the CGS.  Also in the field was Chris Barnes, after playing many events as a guest Chris is now a full-fledged member.

Once again the Caribbean Golf Society brought some of the Caribbean sunshine to the British Isles and with base layers the norm of the day amongst the players by the back nine it was starting to get warm enough for short sleeves – maybe!

In attendance was last season’s order of merit champion Trevor Lammy who was told that no one as every defended the title and that may still stand albeit early days as Trevor wasn’t able to deliver the same level of performance to which he started the 2014 season. Finding it a little tricky on the greens Trevor wouldn’t be picking up a prize today.

The usual prizes were on offer for those in attendance; longest drive, nearest the pin and nearest the pin in two on a par 4. The longest drive was the first “in round” challenge and it was on the par 5 eighth a very straight layout with full view of the target marker. The winning drive came from Jay Berryman a man not known for his long drives but on this occasion he passed the previous mark by some 30 yards which was by Rhucha Ford whose drive many described as being a long way – do I hear a cry of “test him”! Well done Jay, Ian looks like you may have some competition.

The next challenge was the nearest the pin and this was held on the par 3 15th the signature hole. A very picturesque hole with a small pond to the left of the green and also a tee shot from an elevated position this would be a tricky tee shot, especially with the pin conveniently placed on the side of the pond – “where else would they put it”! The winning shot would come from Rhucha Ford who was 22 feet from the hole beating the previous mark by 3 feet.

Onto the nearest in two challenge which was held on the par 4 18th a last hurrah for many who’s round hadn’t gone to plan. With a second shot to 14 feet was Eric Queely who not only picked up the nearest in two prize but also came overall second on the day with 32 points. The course had some similarities to Eric’s home club of Sandwell although a little wider and not as punishing from the trees. In 3rd place and another Sandwell member was Micky Taylor with 31 points, looks like the Sandwell boys felt at home.

“I think 38 points is going to do it today, someone always comes in with a good round and the course is in good shape for a good round from someone” – those were the words of Rhucha Ford who’s steady play was really something to watch. His front nine wasn’t spectacular but he still scored 18 points and really it could have been more. With a couple of poor holes Rhucha came in with 16 points and a 34 points total to take the first Major and the Fix-Up trophy. His work during those winter months has certainly paid off.