Trevor keeps the trophy in Coventry once more! 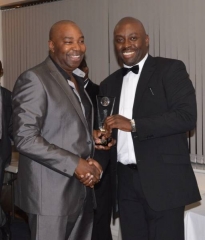 Another year has passed, it seems like it was just yesterday I was writing the season ending review for the 2013 season. Anyway it’s all done and another Champion has been crowned.

It was at Staverton Park where the CGS commenced the 2014 season and it was Charlie McCook who scored 37 points to take the Fix-Up trophy. The trophy didn’t have far to go as the previous winner was nephew Frank McCook. Looks like the men from Coventry have started again where they left off the previous season.

The season was a success for first time winners George Oliver and Denny Senior, Denny taking his first title on Good Friday at Founders Day. A re-visit to the Belfry this time on the PGA course saw Dave Smith walk home with the trophy. Chairman Junior Harris was the only double winner of the season taking the inaugural Captains Trophy at CGS stalwart Swindon GC and in the 7th Major at Little Lakes after undergoing elbow surgery.

The 5th Major saw a revisit to an improved Bransford GC in which CGS Captain Lloyd Thomas revived an old faithful to help him beat the field. The inaugural Chairman’s Trophy saw a first visit to “The Astbury” with the CGS donning Trilby’s to add a little style to the event and it was the style of Nigel Harris who tipped his cap to victory.

In its second season the CGS Open proved to be a success yet again. The event was played over two days at “The Vale of Glamorgan” on two fantastic courses. Ian Higgins proved to be the class of the field in trying to run down Trevor Lammy to the Order of Merit Title, having played consistently in the early part of the season Trevor set a marker that would prove to be out of his reach. Not winning an event and reminiscent to his fellow man from Coventry in 2013 Bob Dhammi, Trevor proved that winning isn’t everything.

This year wasn’t all about self, the CGS represented in the charity event called “Operation 18th” in order to raise money for charity, Junior Harris, Ansel Pottinger, Ian Higgins and Ronald Ross raised over thousand pounds.

We saw the inauguration of yet another trophy this time the “Champion of Champions” event which was created to give Major winners a chance of yet more silverware. The trophies first venue was at the well-received “Patshull Park” and renewed past member Rhucha Ford showed some of his skills in being crowned Champion of Champions for 2014.

The annual 3-way Match between CGS, Bristol Titans and ACGA from London took part at the Bicester Golf Club and was yet again won by the ACGA. We will no doubt have to re-think our strategy next season in order to overcome the very strong Londoners.

After all the formalities it was time for a little banter between members and this year yet another new trophy was conceived called the Regional Trophy. The event replaced the previous Caricom Cup and was won by the last three Order of Merit winners and Charlie McCook, all representing Coventry, Frank McCook, Charlie McCook, Bob Dhammi and Trevor Lammy “The Two Tone Tigers”.

Finally this year’s presentation was held again at the Cap Centre in Smethwick Birmingham and was attended by members and guests along with special guest performers.

It’s been yet another good year for the CGS, interest is constantly growing from far and wide it’s a testament to our professionalism.

Congratulations to Trevor Lammy on winning the title this year, yet another Coventry man – only Charlie left, no pressure!