Emrys on another level in the Malvern Hills of Worcestershire 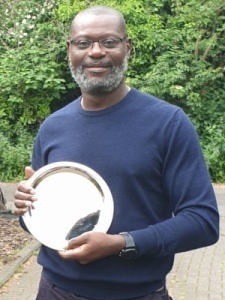 It was a welcome return to The Worcestershire Golf Club with 34 CGS members and guests in attendance. It’s become the norm this season to have over 30 players in the field a testament to the committee’s hard work in getting prompt responses from the members. The introductions of “WhatsApp” to communicate to members has been an inspiration.

The 3rd major of the season was for the Chairman’s Trophy with last season’s winner Ansel Pottinger in the field hoping to repeat his win last season where on the Rowan course at a declining Sapey Golf Club he posted a very good 37 points playing off a 16 handicap. Now off 13 it would be a much tougher challenge on the Worcestershire course. By the end of the day this proved to be the case with a 29 point score proving this venue was no Sapey however with the majority of the field scoring in the twenties this score would prove to be good enough for 5th place on count back.

This season as also seen several new members joining, every event so far as included many guests, some returning and some out with the CGS for the first time. This event was no different with three guests in attendance, a returning Dave Ward who’s now played in several events as a guest means he’s accumulated more than enough appearances to qualify for membership when he chooses to join. The Worcestershire proved to be very rewarding for Dave, who not only scored 34 points but also collected the prize for Nearest the Pin.

Joining the CGS for the first time were Chris Duckett and Peter Handcock both scoring 35 and 22 points respectively with Chris also winning the Longest drive, it was a very successful day for the guests.

It was a warm day on the Worcestershire course, a location which takes in the picturesque Malvern Hills which provides a stunning backdrop to the course. The course was in good condition however the greens were a little lacking in consistency with a lot of patchy areas on several greens. The conditions would prove to be the stumbling block for most on the day, the inconsistencies made them difficult to read and the feedback from the players suggested the same with many saying they struggled on the greens and were making silly bogeys or missing birdie putts.

The scores reflected the feedback with the competition scratch score being 30 points or par 77 on a par 71 course. As usual someone will always get the rub of the green and post a really good score and on this occasion that would be the case.

To start we have to mention the 3rd and 2nd places because their relation to 1st place is the reason why the winner’s handicap was adjusted by such a margin, which is an automated process by the way. 3rd place was Rhucha Ford with 32 points and also winning the nearest the pin in 3 which was held on the 17th hole which Rhucha reached in two with a driver and an iron. The green condition came into play and Rhucha missed the birdie putt the result a 3 putt. Leaving the birdie putt short meant it was close enough to win Rhucha the nearest in 3 prize. In 2nd place was Vassel Brown who also scored 32 points and took the position on count-back. It was a good result for Vassel especially after almost missing the first hole due to confusion over the groupings.

So on to the winner, he did play off a 20 handicap on the day but with a competition scratch stableford score of 30 points he played 10 under par coming in with 40 points and being in category 3 in the handicap system he was adjusted .7 for every shot under par which resulted in a 3.8 adjustment to his handicap, so now Mr Emrys Karemo is off a 16 handicap. We know Emrys isn’t really a 20 handicap the way we see him hit the ball but he’s not always in attendance at CGS events but when he does make an appearance he scores well and with the rest of the field struggling Emrys flourished and won the Chairman’s Trophy with an exceptional score of 40 points winning his 3rd CGS Major.

So apart from the greens it was another good day out for the CGS and no doubt we will return to The Worcestershire again next season, it’s a good venue, staff are very helpful and the meal was well received.