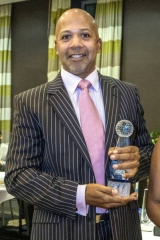 With the golfing season finally over all that was left were our annual presentation dinner and dance a chance to build up some golfing credit for 2016 with the other half!

This year’s event was held again at the Holiday Inn Birmingham Airport; a venue that as previously held our event. The entertainment was provided by comedienne Annette Fagan, Take Two sound system and Three Thirds band.

The CGS committee went through months of negotiations and planning with the venue in order to provide our guests with a great end to the year and a chance to raise some funds for Sickle Cell a cause that has received much support from the CGS.

With a few minor details to the arrangements requiring correction we were good to go and all were looking forward to the event. The schedule was going to plan, all the guests arrived in a timely fashion and were seated and ready to start proceedings.   CGS long time member George Oliver blessed the evening prior to the first guests moving onto the buffet area to receive their first course of the night. Well that was the plan but somehow the hotel wasn’t working to the plan we had provided them, they decided to work to their own plan so no food was prepared for our guests. This was not a good start to the evening and one which will be taken up with the hotel.

As the saying goes the show must go on, compare Jacko Powell provided our guests with some words of apology to the late dinner and then proceeded with the presentation of the player awards.

It’s been an interesting season on the golf course with several first time winners and the inclusion of several new members.

The season started at a new venue, Longcliffe Golf Club in Loughborough. The event was attended by 30 members and two new guests James Sanderford and Norman Keller who both would later become members. The course was in good condition for the time of year and the tough challenge was well received by all in attendance especially by Rhucha Ford who would take home the winners Fix-Up Trophy.

Up next was the annual Good Friday event played for the Founders Day trophy, which was held at Stonebridge Golf Club and was won by Charlie McCook.

The CGS 2nd major was held at a CGS favourite, Wharton Park Golf Club and was well attended by current and past members. It was the biggest field to attend a major in several years with some 40+ in attendance. The scoring wasn’t as high as the last time an event was held here however that didn’t matter to Elford Douglas who secured his first major victory since becoming a member.

Another CGS favourite hosted our 3rd major, Swindon Golf Club near Dudley has been the venue of choice many times before and is a firm favourite amongst the members for the nature of golf required to be able to score well, positional play is key. With the first of his three victories of the season, Howard Browne took the spoils and the hearts of all those in attendance.

It was yet another first time winner and new member Emrys Karemo who took the 4th major at yet another new venue Brandon Wood Golf Club in Coventry. In close second and only beaten on count-back was Howard Browne – start of things to come!

In some difficult conditions at the Vale of Evesham the 5th major was played out and yet another first time winner would lift the trophy. On this occasion it was Rodney Dillon a long time CGS member and welcomed winner. Once again count-back was required to separate not two but three players with Rodney taking the title followed by Mary Riley and Keith Salmon.

“What was becoming apparent was a cloud had appeared on the horizon of this wonderful golfing community — a cloud in the shape of Howard Browne.”

Following from his first win at Swindon Howard once again took the spoils, this time at a favourite amongst some of the members Patshull Park. It was starting to look like the Howard Browne show unless someone could match his results and take the order of merit title away from the man.

With the season fast drawing to an end it was onto the 7th major played at another new course. The Q Hotel and Golfing Resort in Telford was the venue for CGS Chairman Earl (Junior) Harris to start his move towards the order of merit crown.

The final major which has now become a two day venture was held at the Marriot Breadsall Priory and with the Order of Merit title all but won it was chance for the rest of the members to try and get something out of the season. After the first day Roan McLeod was leading and hoping to secure his first win in several years, however the cloud of Howard Browne was looming ominously overhead ready to rain on his parade, lying second after the first day Howard was getting ready to let-rip. The second day was played on the Moorland course and the cloud of Howard Browne opened up and fell on the course and closed out the season.

It was Howards first season playing with the CGS and it’s good to have him on board, with three wins out of six events played, he’s pushing us all to play better and work harder in the off-season to beat him in 2016. In receiving his Order of Merit title Howard stated that he as an idea who will be the man to beat in 2016; when asked who that person would be, he said “their initials are HB”!

Now playing off a handicap of 9 it’s not going to be as easy next season but the man is working hard to achieve it and it’s good to see. He’s pushing us all to improve our game which means we cannot rest in the off-season……..no rest? – I blame Howard!

The year wasn’t all about the majors, the CGS once again took part in the triangle match we call the 3Way Match between London, Bristol and Birmingham. It’s been all London since the start of this fixture but all good things have to come to an end and on this occasion at the Forest of Arden, Birmingham and Bristol took the trophy from London and shared the victory in a very close match.

With all the serious stuff out of the way it was time for some scramble, some Texas Scramble. Played at Guadet Luce Golf Club and with the CGS members having decided on teams from the final major at Breadsall the Scramble event was played and won by Roan McLeod, Paul Ramsey, Clyde Pile and Don Campbell. 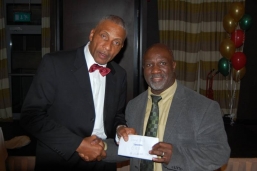 Throughout our season the CGS doesn’t just think about the golf we also support our communities through charitable donations; this is something we have done for many years. One way in which we raise funds is our birdie challenge which we have per event with some of the proceedings going towards our chosen charity. A representative of the charity is invited to our presentation and all funds raised during the season are presented on the night, this year was no exception. Over the years our donations have gone to several different Sickle Cell organisations and on this occasion the organisation was based in Wolverhampton which also benefited from the nights raffle, which raised a tidy sum for a cause which helps many people of Caribbean decent who are affected by the disease. Representing the Wolverhampton based Sickle Cell charity was Mr Clarence Crosdale who can be seen receiving a donation from the CGS chairman Earl Harris.

So yet another season over and with next season being the 10th year anniversary of the CGS it’s going to be a very special time.

Thanks to the committee and all the members it’s been enjoyable and looking forward to 2016.

« Changes to the Rules of Golf for 2016
Guidelines on Issuing, Marking and Checking Score Cards »