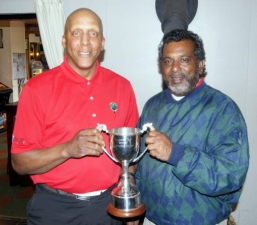 Already into our second major competition of the season and those that missed the founders day event would’ve been looking forward to playing a better course than that at the start of the season.  The venue for the 2nd major was a familiar location to the CGS, Cleobury Mortimer Golf Club.  This location would be the setting for the Captains Trophy with 39 members and guests in full attendance.

The year as been very difficult for most courses with rain paying havoc with not only attendance on courses but also the courses themselves and this was very apparent at Cleobury.  With the weather looking very reasonable on the day it was very unfortunate for the CGS and the club that the Deer Park course was very water logged in places especially off the fairway.  Being three loops of nine it was the luck of the draw that we ended up playing the worst nine holes on the property.  The Deer Park was in a terrible state off the fairway and by rights should have been closed, for me it was the most water logged course I’ve ever played.  Any venue where the course was in such a state would be closed and you would never have to experience those types of conditions.  All being said the fairways were dry so you can understand the club keeping the Deer Park open.

So with the rough like quick sand fairways was the order of the day whilst driving on the Deer Park , this no doubt would be a difficult proposition for a pro let alone a society of handicap golfers.

Keep it on the fairway throughout the Deer Park nine and let rip on the Badgers Nine this would be a good strategy however walking the course the murmurs coming from some of the players proved that such a strategy was hard to follow, again quick sand again comes to mind when describing the rough.

In all society days and especially when there is a large field you will always find someone who manages their game on the day to post a good number and on this day that was Micky Taylor, with a score of 39 points a solid round considering the conditions it shows that anything can happen.  With the top three players only separated by a point and the par for the day coming in at 35 points, players were coping very well.  An excellent score from Mr Taylor who played in the company of friend Eddie Wedderburn, so a little friendly rivalry may have ensued to help produce the quality of the score submitted; he takes spoils and the Captains Trophy.

In the runner up spot and only on countback with 38 points was Paul Ramsey who must have thought 38 points would be good enough for the win. Also Trevor Lammy may have thought the same walking off the 18th with 38 points; however it wasn’t to be, with one point proving enough to separate first or third.  Although coming third may have been a disappointment for Trevor picking up the longest drive prize may have eased the pain a little.

The man who as more long drive trophies than most Ian Higgins failed to keep his ball on the fairway but was able to claim the nearest in two prize and the one shot wonder otherwise known as the nearest the pin went to Junior Harris.

Although the course wasn’t in the best of conditions on the day it’s still a venue that most would CGS members would play again – but maybe later in the year!

So thanks to Cleobury for your hospitality the meal afterwards was well received.

« Home is advantageous yet again for Keith Riley!
Rob was Angling for the Chairman’s Trophy! »