Clyde clinches it at Walsall 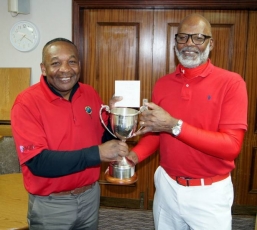 The second major of the season and Captain’s Trophy brought the CGS to prestigious Walsall Golf Club, a new venue for the tour.  Twenty-four players turned out on a cool, dry day with some sunny spells and a light breeze making for good playing conditions. No blaming the weather if you had a bad day!  The hospitality provided by Walsall was first rate with members and staff giving us a warm welcome. The meal was much appreciated by all and rated as one of the best we’ve had.  Thank-you Walsall Golf Club.

The Course was in good condition with fairways lined by mature trees making straight driving the order of the day.  As one Walsall member commented, “If you’re in the trees, take your punishment!”  The greens were well protected with most having at least two greenside bunkers though some players commented that several of the bunkers could have been in better condition.  The greens were true but had been recently dressed and were very firm for this early in the season.  The observation was made that this would be a great course to play later in the year.

As for the golf who would master the conditions and come out on top.  This competition saw a new initiative with Nearest the Pin in three at the par 5 eighteenth – credit to the committee for looking at new ways to keep it interesting.  This prize went to Chairman, Junior Harris who was within 20 feet; with both short and long hitters having to play their third from a downhill lie a very creditable shot.  The longest drive went to Clyde with a Pile driver of a shot on the eleventh, showing the usual suspects a clean pair of heels! Good to see a different name edging out the boomers. Nearest the pin saw a cracking shot to within two feet on the tenth to bring home the prize for Rodney Dillon – great shooting, Rodney.

The top half of the table was tightly packed with only two points separating positions two to eleven; some consistent players fighting it out then. Four players carded 32 points and three more carded 33 but couldn’t get on the podium.  Scoring however did cast a slight cloud over the day with some confusion caused by cards not clearly marked.  All players were (and are) reminded to be meticulous in both keeping their own and partners scores and in signing for those scores.  Fortunately, there was no bearing on the result and a number of members offered to help and advised anyone not sure or confident in marking cards.

Almost at the top of the table three players came in with 34 points bringing countback into operation.  Pushed into fourth place was former captain Elford Douglas.  In third place having played some excellent golf as witnessed by his own group and the preceding group was Rucha Ford and capturing second place was “Mr Consistency” himself, the ever-popular Dave Brown.  But there could only be one winner, a clear three points ahead of the pack and claiming his first victory for a while was Mr Clyde Pile.  Having mastered a challenging course, kept out of trouble and putted well, the Captain’s Trophy was a well-deserved reward.  Well played Clyde, although you finished with a severe limp, you flew the flag for the over 60’s for the second consecutive event.