Ian Higgins Pops in a 23 Back to Clinch the Caricom Cup! 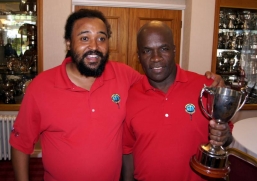 Olton is one of those well-established courses that we sometimes find difficult to arrange a tee time especially for weekends which is the CGS preferred time of the week, but on this occasion Olton were very accommodating and welcomed 36 of our members and our single guest Carlton Donald.

The course isn’t long but the trees either side of the fairways provide more than enough defence.

With the large numbers in attendance we were offered the opportunity to use the first and the third tees to start our round and this was duly accepted especially after the debacle in our last major where slow play was a big issue.  With 3 groups on the 3rd and the rest starting from the first, our 4th major the Caricom Cup was underway.

The flow of the round was much improved, with marshals assigned to each group to help control the pace of play the rounds flowed well and there were no real hang-ups worth speaking about.  Out on the course the only real issue came from Olton, who due to a misunderstanding failed to place the relevant markers out on the course, for longest drive, nearest the pin and nearest in three.  This was unfortunate because by the time the first group reached the 10th to contend the longest drive there was no marker so they did not compete for the prize, the same  for the 2nd and 3rd groups so the committee who were informed decided to pull the longest drive prize from the day’s event.  Contact was made with the club who then managed to place the other markers on the relevant holes in time giving all groups a chance.

Playing in the first group out on the 1st tee was Roan McLeod who was playing some excellent golf, off the tee wasn’t going well but scrambling from trees and putting was keeping him in the competition and with four birdies and an eagle he posted a score of 38 points shooting a gross 75 playing off a 7 handicap and it included a no score on one hole.  He also contended  and set the bench mark for nearest in three which was held on the par 5 18th,  he reached the par 5 in two but missed the eagle leaving is effort for nearest in three to within 8 inches which was never beaten.

With the 38 points being posted by Roan he was hoping it would be enough to win his first major in over five years, so it was a long wait waiting on the others to post their scores.  At one point the closest was Keith Salmon who came in with 37 points and would eventually finish 3rd overall, so he still had a chance.  In came 29’s, 34’s and other scores in the twenties and thirties but nothing close enough until Ian Higgins who had a very poor front nine also came in with 38 points but scoring 23 points on the back, won the event on countback.  It was a solid round on the back nine from Ian shooting an even par gross on the back was some solid play especially after only scoring 15 on the front it was a great recovery a back nine that included two birdies and two bogeys.  It was a shame for Roan after playing a 5 over par round.

The nearest the pin was held on the 13th tee and was won by Mickey Taylor.

Congratulations to Ian, whom every year wins something whether it’s longest drive or 1st, 2nd or 3rd, he must be glad we switched the event prizes to vouchers otherwise he would need a bigger trophy cabinet.

So thanks to Olton Golf Club for inviting us to use their course and for the lovely meal afterwards, we all liked the course and would love to get another chance to play it next year.

Also a big thanks to all the players who attended, the speed of play was something we need to continue for future events so keep it up.

« Chris Wins First Major On A Challenging Day at Lingdale
Chairman Harris closes in on the Order of Merit! »