A Special day at Gaudet Luce for Julia 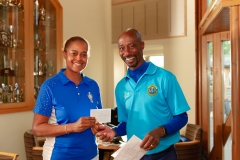 The CGS headed to Gaudet Luce for our 2nd Major of the season, with a large field of 48 members the event was well attended. Also in attendance with an aim to help promote diversity within golf was England Golf. CGS member Julia Regis has been the prime driver to bring more black women in to golf and as already organised several taster golf sessions around the Birmingham area. The taster events were a great success and were all fully booked up. This led to England Golf getting involved and thus arranging to attend the CGS event at Gaudet Luce.

The involvement of England Golf also benefited Gaudet Luce and they offered CGS members little goody bags which included amongst other items a voucher for £20 off a return round.

This has been a venue visited many times by the CGS, 2021 Chris Powell took the honours with his second win of the season winning the Secretaries Shield with 36 points from Chairman Junior Harris. That win took Chris to the top of the Order of Merit and started what would turn out to be a close race for the title which Chris eventually won, holding off Eldridge Cunningham and Keith Salmon.

Our previous visit to Gaudet Luce took place in July and the event report described the course as being in “great shape” with special praise given to the green staff for the great job they’d done in preparing the greens which were said to be “some of the best” the CGS had played all season. The key to that course is the time of year its played, unfortunately our most recent visit was held in May and didn’t quite live up to the experience we had the year previous, the key area which was disappointing was the greens which had such praise the year before. The greens were a little disappointing especially with the amount of good weather we had experienced for several weeks before. The greens were very fluffy and slow which was a shame as most of our members home courses were in great shape and much faster having taken advantage of the good spell so it was a shock these greens were the way they were. The rest of the course was on par with the year before so that’s the one positive.

No matter the conditions a winner had to be decided, its about how you can manage your game and adapt to the conditions. With 48 players it was going to be a slow one, its not easy getting that many golfers of varying handicaps around the course within the four and half hour average time. We have to remember that when you attend a society golf day with that many golfers you must factor in the whole day, don’t expect to be home early.

Anyway lets get back to the days play. The scoring wasn’t too bad considering the greens, there was still some 22 birdies made on the day so putts were dropping, four of those birdies came on the par 4 5th hole. With scores ranging from high thirties to low twenties and worse, birdies were the highlight for most on a rainy day.

Now for the top three prizes and ultimately the winner of the CGS Memorial Trophy. In 3rd spot and one of three players in the top four spots with 35 points achieving that position on count back pipping Eddie Wedderburn to one of the top three places was Keith Salmon. In runner up spot and also scoring 35 points was Harvey Lawrence, apart from a no score on the very first hole Harvey was scoring very well especially the back nine where Harvey was three over par gross which was excellent golf. Both Keith and Harvey scoring 35 points was just three points short of the 38 points scored by the Lady of the moment and the inspiration for England Golf being in attendance was Julia Regis, it was a fitting outcome for all the hard work Julia as achieved in the month before with all the taster sections she had organised. The 38 points included a birdie on the 4th hole and a five over par gross on the back nine. Julia played some excellent golf and wins her first CGS major and the Memorial Trophy.

With our 2nd Major now a distant memory its onwards to the third major at Ross On Wye Golf Club, a first visit to that venue for the CGS where another large field is expected to play for the Captains Trophy.

« The Old Pro Landis Victory at The Staffordshire
Dale returns to the winners circle! »