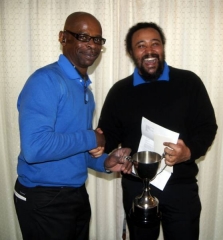 It’s now been ten years since the start of the Caribbean Golf Society and being our anniversary year we were hoping the first event would get this special year off to a good start but unfortunately Cold Ashby Golf Club failed to provide the quality we were hoping for.

The course was a major disappointment for most of those in attendance, the layout of this venue was not an example of any course designed with golfers in mind, and it could be described as a farmer’s field with bunkers and greens.  Some of the greens were terrible with large chucks dug out in places, the rough was so uneven you could easily turn an ankle and the aprons around the greens on some holes was in a terrible state with the ground dug up, you couldn’t possibly hope to putt  when just off the green.

On the day all bunkers were out of play and classed as GUR, every tee was played from mats the majority of which were pretty useless, it was hard going trying to tee up your ball. All in all, the course should not have been open to the paying public.  We were told that the weather had been very bad a few days previous however it could not have accounted for the condition of the greens.  This is one course the CGS will not be returning to anytime soon.

In spite of the course conditions this was the “Fix-Up Trophy” and an event winner was still a required outcome of the day, with 34 members and guests it would be a test for most.

For the first time we were accommodated with a two tee start, maybe the course conditions played a part in that decision.  Anyway the two tee start aided in the speed of play and allowed us to finish in good time.

The scoring on the day reflected the conditions; 35 points would be the winning score with the majority of the field scoring in the twenties.  Frank McCook was yet again the winner of the Fix-Up trophy.  Starting out on the front nine and in the first group he was able to post a mark that would stand throughout the day.  Having been playing some good golf at his home club the score was a reflection of time spent on his game during the winter months.

The nearest challenger to Frank was Emrys Karemo who shot 34 points playing off a 24 handicap and third went to Jacko Powell who was surprised his 33 points would be good enough for third place.

The nearest the pin went to guest Ben Smith and nearest in two went to Junior Harris.  The usual suspects for the longest drive were nowhere to be seen with Carl Cunningham the surprise winner of that challenge.

Guests on the day were Ben Smith and Mike Radway.

The service from Cold Ashby wasn’t all bad; praise must be given to the kitchen staff that provided a lovely meal.

« Guidelines on Issuing, Marking and Checking Score Cards
Home is advantageous yet again for Keith Riley! »