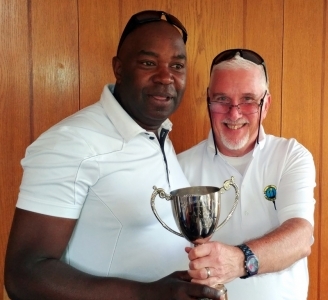 The fourth major of the year saw the CGS return to the prestigious Walsall Golf Club which we played for the first time last year. When we played here last year it was early in the season and although the course was excellent the greens hadn’t reached their best, this year course and greens were in great condition and tested players’ skills to the limit. The course had hosted the club’s Captain’s Day just 24 hours earlier and the pin positions were testing to say the least.

Twenty seven players set out including Carl Cunningham as a returning member and Winston McClean returning as a guest. We also welcomed Karl Frail playing as a guest. The scores reflected the challenge presented by this well, set-up course with accuracy needed on the fairways and absolute precision on the greens. Chris Powell related how from having a putt for eagle he saw his ball continue past the flag and “dive” off the green. He ended up facing a 3 footer to save his par.

The 10th hole was the nearest the pin and saw Carlton Donald, last time’s winner, set an early mark, only to be pipped by Trevor Lammy and then by the winner, Ronald Ross. Well played, Mr Ross!

The longest drive at the 11th hole changed hands even more with Carlton and Trevor setting the early marks only to be overtaken by big hitting Roan McLeod however even this didn’t take the prize as along came The Chair to pass everyone else and claim the honours. Congratulations Junior.

The 18th hole saw the return of nearest the pin in 3 a popular alternative introduced here last year. Chris Powell, out in group one, set the mark at 7 foot 5 inches. Despite six groups and 24 players following him nobody could better this fantastic effort and Chris was able to claim the prize.

A number of players put in steady performances and the par score for the event was a creditable 32 points. Dave “Mr ” Brown returned a very creditable 33 points to take 3rd place with Eddie Wedderburn taking second by a single point and ruing a missed putt on the final green. Eddie also took the prize for wearing the brightest trousers of the day and being continually ribbed by his playing partners! However, playing some magnificent golf and scoring an excellent 35 points from a handicap of 9 was the Coventrian, Trevor Lammy. Playing in the same group as Trev I had the pleasure and privilege of watching big hitting, accuracy, touch and control from the big man and all delivered with encouragement for the rest of us and that TL humour.

Finally, as groups finished we were greeted by the familiar face of Denny Senior, not yet back to playing golf but improved enough from his surgery to come and say “Hi” and collect some scorecards. Great to see you Denny, hopefully see you on the fairways soon.

Thanks to Walsall Golf Club for hosting us again this year, everyone endorsed the course as one we should seek to return to and the approval for the food was equally enthusiastic with it being described as the best we have had. THANK YOU,

« Carlton improves to Victory for the FixUp Trophy
Carlton grows from strength to strength! »