Higgins makes it 3 in a row! 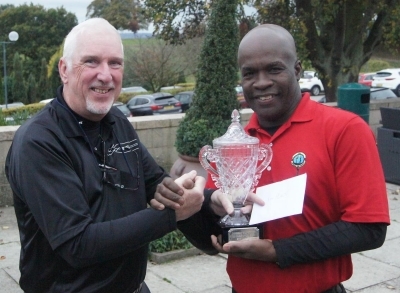 The final CGS Major, the Charlie Sifford Memorial Trophy, was held at the Breadsall Priory Hotel & Country Club in Derbyshire. The last event of the season is played over two days and was played on the Championship Priory and Moorland courses. With the Order of Merit still wide open it was a chance for four or five players to get in on the act if things went their way.

The attendance this year featured only 20 CGS members and two guests; a situation that will no doubt be discussed at AGM. The lower numbers though didn’t make the golf any less competitive and the weekend saw some solid golf and good scoring.

The first day was played on the Championship Priory course, the conditions were good with fine weather and a course in pretty good nick for the time of year. The Priory course requires accurate play and will punish those who stray too far; with mature trees and its slopes and banks it proved challenging with nobody able to score better than their handicap. The greens were in good condition for the time of year and with some subtle breaks they proved to be very challenging.

The best score posted on the Priory was a respectable 35 points by Ian Higgins looking to retain the trophy and to challenge for the Order Of Merit. This score was matched by Martin Chidgey having his best round of the season. Only five other players managed 30 or more points and these included Mickey Taylor (32) and Carlton Donald (30) both in contention for the OOM. Linton Bell, Junior Harris and Vassal Brown were the other high scorers and challenging Ian’s hold on the trophy. The Competition Scratch Score for this round was 73 (33 Stableford) which demonstrates how challenging we found the course.

The first round saw the inclusion of the usual on course challenges of the nearest the pin in one Junior Harris, and nearest in two and the longest drive went to Ian Higgins. As always there is keen competition to try and win these challenges.

After the round people enjoyed a relaxing evening with a good meal and down time in the bar… Apart from those who returned to Birmingham to celebrate a birthday! Don’t know what time they got back it was well after this golfer’s lights went out!!!

Day two started with breakfast and a visit to the range for those who could manage it though some of the “stop-outs” seemed to arrive on the 1st tee just in time and possibly without having managed breakfast. The Moorlands course is less strenuous and arguably less challenging than the Priory with its sloping fairways. It’s certainly more open giving wayward drivers the chance to get back in play if they weren’t lost in some of the longer rough.

With the Order of Merit still to be won it was going to be a competitive day and with the course being more open and flatter there would no doubt be an improvement in the scores. And as the groups started to come in that’s what we could see, some excellent cards reflecting both the easier conditions and the determination of players to make their mark and challenge for the trophy.

One significant improvement from day one was Tony Seally, setting the mark with the days best score of 42 points Tony played very solidly and showed what could be achieved. Martin Chidgey couldn’t live up to his first day’s scoring but still managed a respectable 32 points to finish in seventh place overall. Of the other leading players Vassal Brown and Junior Harris both carded 39 points while Linton Bell was consistent on both days scoring 34 and 35 point respectively. Ken Brown returned an excellent 38 – great scoring but not enough to feature in the places. Compared to the day one the Competition Scratch Score for day two was 66 strokes (40 stableford points) a difference of some 7 strokes.

Carlton Donald returned an excellent 41 points to match Vassal’s overall score of 71 points and to take third place on count-back. Mickey Taylor scored an impressive 40 points to edge himself into second place by a single point, but it was Mr Golf, Ian Higgins who matched Carlton’s 41 points and scored an extraordinary 76 to win by 4 clear points. Ian not only retains the Charlie Sifford Memorial Trophy but wins it for the third consecutive time – well played Higgi!!

So, with the trophy decided what had happened in the Order of Merit? Possibly the closest finish we’ve ever had! Mr consistent Dave Brown could only manage 4th place with a very good 638 points. The top three places were separated by a mere 20 points and with an ominous 666 in third place was Mickey Taylor, another excellent season for “The Joker” and oh so close to glory. By virtue of winning this event Ian Higgins jumped up the order and with 676 points nailed second place in the OOM. However clinging on at the top with 686 points thanks to his third place here, Carlton Donald was able to clinch the OOM title. Well done to this year’s champion.

Watch out for information about the AGM, there has been some discussion of the scoring system and the possibility of revising this to reflect the fewer number of players we have seen this season. Members thoughts would be welcomed.