Bromfield does it again! 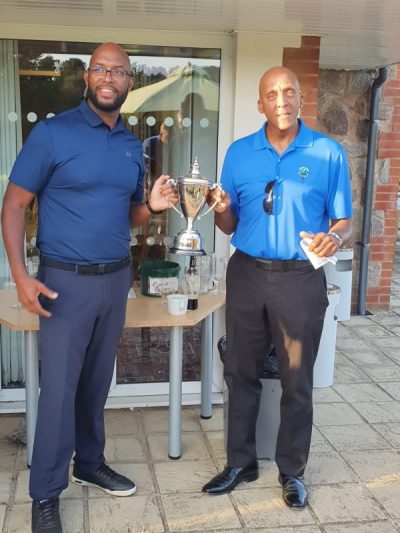 The CGS tour rolled into Loughborough to play Lingdale Golf club probably one of the best courses that we’ll play this year.

We were here to play for the The National Caribbean Memorial trophy (TNCM) which is so name to promote the erection of a monument at the National Memorial Arboretum in Staffordshire, in honour of the fallen soldiers from the Caribbean islands from the 1st and 2nd World wars.

The 32 players turned up to glorious sunshine, again with a stiff breeze which seems to be the case at all the events so far this year.

The course was in magnificent condition and we picked the right day to play it as it had been set up for the Lingdale Ladies county championship tournament. The fairways had been mowed and shaped beautifully followed at the end of each hole by some lovely greens. However the pin positions were not in the most favourable positions. So no target golf today, just aim for the middle was the order of the day.

The tough pin positions and the stiff wind made this another low scoring event.

To his surprise and obvious joy the player that achieved this was winner for the second time this year Dale Bromfield. In second place with 30 points last years order of merit winner Eddie Wedderburn and in third place Ron Ross.

Such was the low scoring one embarrassed player whose name shall not be mentioned left the course immediately without so much as a good bye to his playing partners. Hopefully he hasn’t thrown his clubs in the bin. LoL!

Other prizes on the day where won by the following:-

Nearest the pin was won by Dale Bromfield but didn’t get the birdie.

Nearest the pin in two was guest Carl Douglas.

Nearest the pin in three was won by Noel Wright who playing alongside Mick Taylor just beat him to it but where Noel didn’t get the birdie Mick did.

Overall it was a great day at Lingdale golf club and I’m sure we’ll be back next year.

Well now with just the weekend away it really is all to play for, for the title of Order of Merit champion 2020.

Once again the reigning champion (Eddie Wedderburn) has no chance of retaining the title and to date no winner has been able to hold on to the title.

It seems it is now between the top two, Dale Bromfield the front runner all year on 666 points (the mark of the beast) and Earl Harris in 2nd on 612 points.

Should either of those two slip up we have Ronald Ross in third on 586 points and Chris Powell on 558 points waiting to step up.

So the pressure will be on – “who can handle it” we’ll have to wait and see!

Final event of 2020 will be at St Pierre Golf Club where for the first time we will be playing two competitions, mainly due to loss of the early seasons golf, caused by the pandemic.

This year it is in remembrance of Ken Brown who is the first member to sadly leave us.

Let’s hope Covid 19 doesn’t spoil what should be an exciting and enjoyable weekend.