Multiple Winners at the CGS Weekender

The start of every season the CGS committee plan for eight majors to be played across the country focusing mainly in the Midlands. Its a schedule that’s been planned every season since 2007. In 2020 with the outbreak of COVID several events had to be cancelled and it was thought that we may only get to play two or three events this season, however the committee pulled out all the stops and managed to arrange a full season in a much shorter time span. It was CGS secretary Chris Powell who called around and managed to get all the events booked up with some really good deals. All the efforts made culminated with the season ending weekender. A two round event for the Charlie Sifford Memorial Trophy.

The beginning of the year the CGS was hit with the sad loss of one of its long time and most respected members, Ken Brown. In tribute to lost members of the CGS family the committee decided to rename the Chairman’s Trophy to the “CGS Memorial Trophy” with Ken has its first honouree. Due to the rescheduling of events the weekender contested two majors, the first day was the 1st round of the Charlie Sifford Trophy and also the days scores went towards the CGS Memorial Trophy. 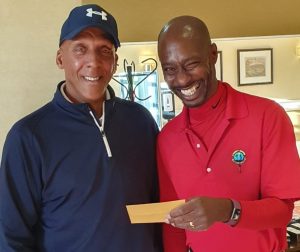 It was an excellent turnout for the two day, two major weekend with 31 golfers in attendance at the St Pierre Marriott Hotel & Country Club. The sun was out in Chepstow a far cry from previous days throughout the rest of the country. The first days play was held on the Championship course and the course condition was very good for the time of year. The Championship course is a real challenge of golf, its long and requires a good tee shot to be with any chance of hitting the green in two. It was a good test of golf but with day one for the Charlie Sifford being competed for and the winner for the newly created CGS Memorial Trophy, the course proved difficult for most with the scores ranging from 18 points to 33 points and scoring 33 points along with Al Beckford and Ian Higgins but winning on count back was Eddie Wedderburn. Eddie was also in contention for the Order of Merit so it was a good start for Eddie with the first win of the weekend taking the CGS 7th Major his scores would also go towards him attempting a CGS first by winning back to back order of merit titles.

To be in with a chance of winning the Charlie Sifford Memorial Trophy players have to play well for two days, its the reason why this event was created, being able to turn up and have one good day is how all our other majors are decided but for one event per year consistency is key. You can play well on day one as Eddie proved but to do it two days in a row that’s a different story. It also brings others into play. Some may not have had a good score on day one and others may be a point or two off the lead but with the second round yet to play there’s a full days play where points can be made up. This was the case after the first day, with only ten golfers scoring in the thirties on day one it was a lot closer than it seemed.

So after a socially distanced evening meal it was early bedtime due to bars being closed at 10pm.

The second days play was held on the Mathern course, a course you could easily take for granted after the short par 4 first which was easily drivable as was proved by Trevor Lammy. However after hole one the rest of the course required a little more respect in order to score well. Not being as long as the Championship course but in its defence were elevated greens, water and more doglegs so you need to keep that ball in play.

It was a course which most said they preferred to the slog fest of the main course. However just like day one the scores weren’t much better ranging from 13 points to a winning score of 33 points which was achieved by Tony Blackwood. 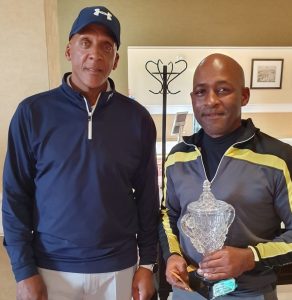 As mentioned previously this event isn’t about one round you have play well for both days to take the title and after day one where he’d scored 31 points and finished in 6th position the second round was only one better with 32 points but the combined score of 63 points was good enough to beat the first round leader Eddie Wedderburn into 2nd with 62, but scoring one better was Eldridge Cunningham who was quite shocked that he had won, but his steady game proved good enough to beat Eddie and end his hopes of back to back Order of Merit titles.

Its been a compressed 2020 season but the ultimate goal is the same every year and that’s to crown a champion golfer, someone who’s proved they have the game to play consistently the entire season. Well the 2020 season produced an Order of Merit winner who has most definitely earned that title, he’s pretty much lead for most of the season and as been one of the most improved golfers in the last few years with the CGS. Dale Bromfield’s hard work as paid off with him taking the Order of Merit for the 2020 season.

So congratulations to all the winners from the weekends events and thanks to all the committee for all their hard work in arranging a full schedule. But all the spoils must go to Dale winning his first CGS Order of Merit title.

« Bromfield does it again!
In Honour of Our Brother Ken Brown. »