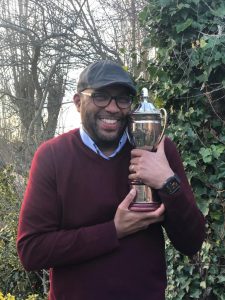 It was a difficult start to the 2020 season, the CGS laid to rest one of its great ambassadors and friend Ken Brown. Ken was with the CGS from its inception back in 2007.

We all had to get adjusted to “Lock-Down” and our golfing schedule had to be adjusted accordingly. We were due to start in March at Kilworth Springs but that got cancelled. Founders Day and the Captains Trophy also got cancelled and were rescheduled for later in the year.

The committee done a great job to reschedule all the events so that we still had a full season.

The first event started in June at Willesley Park for the Caricom Cup and was won by Dale Bromfield with 42 points playing off a 20 handicap. It would be the start of something special for Dale in 2020.

We then moved on to the rescheduled Captains Trophy which was held at Telford Golf Club where Clyde Pile secured victory with 40 points. It was a great day for Clyde but was spoilt by some racist comment towards CGS members by a guest of Telford GC. It is safe to say the CGS will not be revisiting that club in the future. Well done to Clyde.

The next event for the Secretary Shield was held at Staverton Park in July and scoring 39 points and winning by three from Dale Bromfield was Al Beckford.

The CGS Players Trophy was next in August and was held at Cleobury Mortimer Golf Club on the Badgers and Foxes. On the day Ian Higgins was the man taking home the trophy with 38 points pipping Noel Wright by one point.

The rescheduled Fix-Up Cup was up next and was held at The Staffordshire Golf Club formerly know as Swindon. Its been a favourite of the CGS for some time and a very close favourite for the eventually winner Ronald Ross who recorded the CGS first Hole-In-One back in 2011. On this occasion there was no repeat of that feat back in 2011 but scoring 34 points and winning on count-back from Chairman Junior Harris, Rossi sealed the deal to claim the Fix-Up Trophy.

The TNCM Trophy came around in September at Lingdale and having the season of his life was Dale Bromfield who as been the form player and the most improved for the last couple seasons posting a low 32 points to win on the day by one from Eddie Wedderburn.

It was now looking like the 2020 season would be the Dale Bromfield show, with just two events remaining it was all but in the bag for Dale.

Up next was the CGS Memorial Trophy which along with the Charlie Sifford Memorial Trophy were both held at the same venue which was St Pierre in Chepstow. A lovely golfing venue saw over 31 CGS members and guest travel mostly from the Midlands to play. Due to COVID and our re-adjusted schedule the two trophies would be played for over the weekend. The Charlie Sifford Trophy which is based over two rounds would still stand however the first round scores went towards the Memorial Trophy and on day one Eddie Wedderburn was the victor with 33 points to win on count-back from Al Beckford.

Only scoring 29 points on day two Eddie missed out on winning the Charlie Sifford Trophy by one point to some consistent golfing by Eldridge Cunningham who posted rounds of 31 and 32 points to claim the trophy.

The only season trophy now remaining was for the seasons best golfer to claim the Order of Merit title and with some consistent golf earlier in the season it was almost certain that Dale Bromfield would take it barring something outstanding from the chasing pack, but Dale hung on to claim the title.

It was another successful season scheduled and coordinated by the committee and the golf was of the highest standard by the CGS members but it was Dale Bromfield who shone through and would claim his first Order of Merit title. It was a shame that due to COVID we were unable to give him a proper celebration from our usual Dinner and Dance Presentation but he was well applauded during the weekend in Chepstow. Congratulation to Dale.

« Multiple Winners at the CGS Weekender
In Honour of Our Brother Ken Brown. »