Junior shows age is nothing but a number! 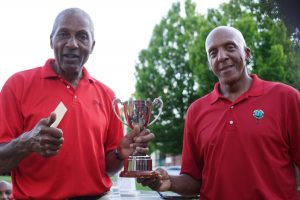 The CGS tour returned to Staverton Park for what was a free round for those that attended this course last year. This was due to the poor condition of the course mainly due to the pandemic which caused many courses to lay off their green keeping staff.

This month’s competition was for the Caricom Cup, where what now seems to be the norm, was that once again we had 40 players.

The course was in a considerably better condition compared to our last visit, however the greens were exceptionally slow but true and could have done with a cut. The weather condition was good with plenty of sunshine, however there was the threat of some showers later in the day.

In typical British fashion we did have a couple of light showers, one of which was particularly heavy causing many to get their waterproofs on and brollies out, especially when there were also hail stones pelting down with the rain.

It did seem however that the slow greens & hail stones didn’t bother the eventual winner, as closing in on the age of 70 our chairman Junior Harris who came in with an excellent score of 38 points. Congratulations to Junior on returning back to the top of the podium proving to all that age is nothing but a number.

In second place three points behind with35 points was current Order of Merit Champion Dale Bromfield, showing that he is looking to be the first player to retain the title in the history of the CGS.

In third place with 34 points was Chris Powell who seems to be on his game at the moment having already won the first major at Kilworth Springs, he’s certainly challenging for this year’s Order of Merit.

The other on course prizes which were won by the following:-

The Longest drive was actually the first drive of the day on this hole and remained unbeaten for the duration, there was the usual comment “I was way longer but just off the fairway” but if you’re not on the fairway it don’t count, simple! Anyway this was won by another player closing in on 70 years of age, Ansell Pottinger. Just shows that getting old nowadays is no disadvantage.

Nearest the pin in two was won by Noel Wright who is coming back from a knee op.

Nearest the pin in three was won by visiting guest from Nottingham Spencer Price. It was nice to see Spencer and his pals again and hope they all enjoyed the day.

The birdie hole for the day which is randomly picked prior to the start was the 11th hole and was worth £42. This was to won by Keith Salmon.

Now after three events the order of merit table is beginning to take shape and the current top two spots are sharing 1st place with 306 points are Ansel Pottinger and Eddie Wedderburn and in 3rd place and in close proximity to top spot is current champ with 294 points Dale Bromfield.

For once we were able to stay and have a drink, and despite the clubhouse closing we were able to enjoy a drink and carry out a small presentation outside the hotel bar.

Hopefully if things get better we will be able to stay for a meal and have a proper presentation.

Thanks to Staverton Park for welcoming us back to the course, the CGS now move on to Cleobury Mortimer for the Champions of Champions trophy.