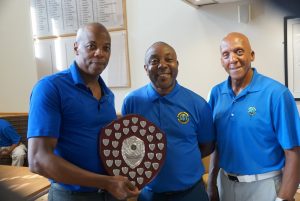 The committee have once again come up trumps and scheduled a great venue in Gaudet Luce Golf Club in down in Droitwich in Worcestershire. The green staff done a great job preparing the course, the greens were some of the best we’ve played this season and the course overall was in great shape. The event was played during the spell of warm weather but the conditions were very playable and was very different compared the last event for the Champion of Champions several weeks before when rain welcomed the field at the start of the day.

This was another day and another venue and the conditions welcomed a field of some 36 golfers who were bidding for honours as a 2021 major winner and also claiming the Secretaries Shield. Amongst the 36 playing was one guest player Errol Simms who would be trying to claim a nearest the pin or longest drive prize.

The seasons Order of Merit is hotting up with almost half the seasons event already gone so this event at Gaudet Luce was very important for those in the race for Championship honours.

The Gaudet Luce course is not an easy track and one of the longest we’ve played this season. The front nine holes leads you in nicely to your round before a very challenging back nine kicks in with many long par 4s.

There were 16 birdies in total from the field with the par 5 8th hosting six of those birdies, it was also by a stroke of pure luck the same hole picked to represent the birdie hole challenge, so the winnings on that hole was spilt six ways.

The overall placings for the Secretaries Shield were in 3rd Place with 35 points Ian Higgins. In 2nd on count-back also on 35 points was Chairman Junior Harris who failed to score on the last hole, a hole which would turn out to be very costly indeed, as the winner with 36 points was Chris Powell, taking his second win of the season which meant he’s now top of the table in the Order of Merit, with Eddie Wedderburn in 2nd and Junior Harris 3rd

With four more events remaining the top three spots on the Order of Merit are separated by 42 points which is one of the closes it’s been for many a season. Also with two of the top three having now lost a shot after handicap changes it could open the door for several others in the top ten with a chance of being crowned Champion of 2021, so its game on!

The CGS players really enjoyed the day with a great course and great hospitality from the staff at Gaudet Luce it was a very enjoyable day. The committee would very much like to thank every one at Gaudet Luce from the green staff to the bar staff, also special appreciation for the goody-bags which each player received was a very nice gesture, not something we expect but was well appreciated. It’s those little things that you remember when organising events for the following year.

Next event will be held at The Worcestershire Golf Club, another great venue. Last played in 2019 and was won by Emrys Karemo with a massive 40 points, winning by eight. Not sure the winning score will be as high this time around but hopefully everyone will have a great day.