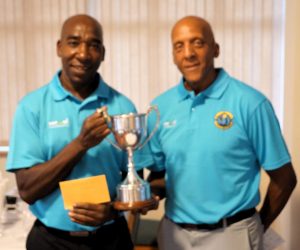 The Malvern Hills was the location for the CGS’s 5th Major Event of the season, the venue was The Worcestershire Golf Club a venue last visited in 2019 where Emrys Karemo won by 8 points with 40 on what is a lovely golf course set in lovely surroundings.

It was another great day for the CGS and it was the start of a new collaboration with our new sponsors Servol whom have contributed to some new CGS polo shirts which we were wearing on the day. CGS member George Branch who is the chairman of the organisation was in attendance not to only play golf be he gave a brief introduction to those in attendance on the services that Servol provide nationally.

Servol are a national charity who have supported thousands of individuals on their journey to mental wellness, purpose, and independence. The CGS are very proud to be associated with such an organisation especially in the current climate.

The event in Worcester was attended by 34 golfers which included two guests, previous CGS member and 2015 Order of Merit winner Howard Browne was in attendance and also playing as a guest but as now become a member and travelling up from Bristol was Andrew MacDonald, who also played as a guest at the previous event at Gaudet Luce, it was good to see you both.

The report on the weather for the event wasn’t looking good but again the weather men got it wrong and we were subjected to lovely warm weather.

The golf course was in great condition the main focus were the greens, they were quick and undulating and very difficult to read at times. There were many birdies still being made out there, however the challenging greens also delivered many three and even four putts.

Even though the course was challenging as always CGS golfers deliver in difficult circumstances, with the average score being 32 points it showed the level of play in the field. It also showed in the winning score which was only one short of the mark Emrys laid down back in 2019.

Posting a score of 39 points and winning by a five point margin was Keith Salmon, scoring one over gross on the first nine holes, Keith was on fire and apart from several doubles on the back nine his score could easily have been in the mid 40’s. The win allowed Keith to take home the Captain’s Trophy and that prize was duly presented to him by CGS Captain Mickey Taylor.

In the runner up spot with 34 points and playing some of his best golf this season was Chris Powell. Chris is the current order of merit leader and this second place as allowed him to increase that lead even further.

In third place with 33 points was Ian Higgins, claiming yet another 3rd place spot after his previous 3rd place finish at the last event at Gaudet Luce, consistency is the key to this game.

When the architects design courses they take into account the length the trouble and other factors like placement of bunkers, they also give each hole a difficulty index rating. The index represents the difficulty and it ranges from 1 to 18 with 18 being the easiest and so. The hardest hole at The Worcestershire with an index rating of one was the 14th hole, it was the hole in which we hosted our longest drive challenge. It requires a very good tee shot into a fairway which doglegs slightly to the left. The most difficult part of this hole is the second shot into an elevated green which undulates massively from back to front. The designers got it spot on when it was designated the hardest hole on the course and that proved very accurate for our group on the day, with only 3 pars, 11 bogies and 14 double bogies and some even greater than that it proved its ranking. The easiest was the par 3 6th with 14 pars.

The 14th has mentioned hosted the longest drive and for a long time Al Beckford was the front runner. Any straight drive resulted in being off the fairway which doesn’t count towards the longest drive, it as to be the longest but on the fairway. Al was well aware his chances of claiming the prize was slim but all he could do was put a marker down and that’s what he did. Unfortunately it wasn’t to be for Al with two bigger hitters in groups behind him and in the same group two drives passed Al’s mark, one from guest Andy Mac and the other was Carlton Donalds who had won the same prize in the previous event. For Andy it was better luck next time as Carlton once again took the prize.

The nearest the pin in three on the par 5 16th was won by Chris Powell who’s third was a wedge from the fairway which checked up to a couple feet from the pin. The nearest in two on the 18th went to Al Beckford, consolation for missing out on the longest drive prize, unfortunately for Al he was one of those four putts I mentioned earlier, so no birdie for Al. The nearest the pin on the 8th went to captain Micky Taylor who didn’t have the best scoring day but picked up a consolation prize and also made birdie on the hole.

Thanks to The Worcestershire Golf Club for your hospitality, the bar staff were great and some stayed way into the evening until we had departed, that was much appreciated.

Next event is the double header at Belton Woods for the Chairman’s Plate Trophy and the Charlie Sifford Memorial Trophy.