Keith makes it a double at Belton Woods 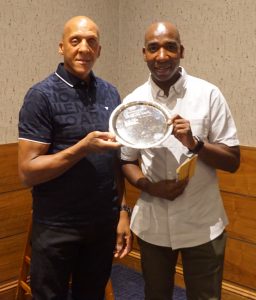 CGS Travelled to Belton Woods Golf Resort in Lincolnshire for a double header weekender. The trophies up for grabs were the Chairman’s Plate and the Charlie Sifford Memorial Trophy, both were Majors and would go towards the overall Order of Merit. The Charlie Sifford event has normally been the sole event of the weekend but due to Covid and some limits in our schedule the last two years we’ve showcased two majors over the weekend. So the format would be the Charlie Sifford would still be over two days combined scores however the first days results would decide the winner of the Charman’s Plate.

Once again the event was well attended by members and guests, with 37 in total it was a very good number for a two day event and some of the members brought their wives to enjoy some relaxation in the spa, Harvey Lawrence’s wife Sandra was the only lady golfer who teed it up with the men as a guest. The other guests in attendance were Owen Mendez and Geoff Thomson.

On the weather front it was not looking good on the reports prior, waterproofs and brollies were packed and in position for the expected downpour but it never came, apart from a few moments of drizzle we were treated to warm dry conditions for most of the weekend.

The courses played were the Woods and the Lakes, the Woods was played on the Saturday and unfortunately for us the greens had been hollow-tined and this was the case on both courses, so our experience was slightly dampened. The course layouts were nice but overall you could see that the venue was se18tup for large numbers of golfers with several societies out on course. The hotel itself I must say was very good, the facilities were excellent, there was plenty on offer for the wives who attended.

On day one, play commenced on the Woods course, the shorter of the two at 6,623 yards long and described as a ‘thinkers’ course. With the Chairman’s Plate trophy up for grabs and many other on course prizes it was down to the first group to get us underway. The first group consisted of Linton Bell, Clyde Pile, Tony Sealey and Alan Ferguson. Straight out the blocks Linton Bell posted the first of the 18 birdies made by the field on the day and along with Alan Ferguson both posted respectable points scores of 33 to post a clubhouse lead.

Considering the course was described as a ‘thinkers’ course the CGS golfers played some outstanding golf with over 75% of field scoring 30 points or more, it was a testament to the quality of golfers the CGS have in our membership. The scoring was so good that the top third of the field scored 35 or more points which was enough to set a Competition Scratch Score of 36 points which was a very high standard of golf for a course the majority if not all having never played before.

Overall it was not an easy course to play and that goes for every golf course, you’ve always got to hit the shots that are required and those that are able to that are usually crowned the winner. On the Woods course any shots off the fairway would end up in some deep rough and would usually result in a lost ball. With a special score of 37 points and claiming 3rd place on count-back was Carl Cunningham, with some excellent golf from Carl 37 points was the highest he’s scored in a CGS event. In the runner up spot with 38 points was last years Charlie Sifford Trophy winner Eldridge Cunningham, the first of two left handers in the top three positions. I’m sure when Eldridge arrived in the clubhouse with 38 points he must have thought that would be hard to beat, playing off an 11 handicap and playing two under is a very good round of golf especially on an unknown course and on poor greens which were bumpy and difficult to read. That score would win at least two of the previous CGS events but on this occasion another left hander would post a round that was so far out of reach it was outstanding as well as a shock to all considering the greens. This is golf and with such numbers in the field someone will always rise above all and manage the conditions better than everyone else. On this occasion the left-hander posting a score of 44 points was Keith Salmon who also played off an 11 handicap and played 3 over par gross on the day, an exceptional round of golf. A round that included a no score on the par 4 12th where Keith made a 7 and failed to score a point, however he made up for that with 5 birdies on his round. The win is Keith 2nd of the season and follows on from the last event at Worcester where he won with 39 points. He’s obviously the most inform CGS golfer at this moment in the season. The win not only nets Keith the Chairman’s Plate Trophy but the 44 points went towards the weekend two day major for the Charlie Sifford Memorial Trophy. So with 44 points and a six point head-start it would be very hard for Keith to not make it a double and three Major victories in a row.

With that haul of points and birdies it was surprising to see that Keith wasn’t included in winning any of the on course challenge prizes for nearest the pin in 1, 2 or 3 and the longest drive, guess he was so focused on his game that fairways and greens were the order of the day and that was pretty much what his playing partners had to say. The quote was “he didn’t do anything special, he just hit fairways and greens and holed his putts, it was solid golf and effortless!”

For the rest of us the on course prizes allowed us to pickup something on the day since the 44 points was so far out of reach.

Winning the nearest the pin was Linton Bell, nearest in two went to Roan McLeod who also picked up the nearest in three prize also and longest drive went to Errol Murray to round out the last of the days prizes.

It was a good day’s golf and the main talking point after the round was Keith’s 44 points.

After some relaxation in the spa and the bar we all convened to the Oak Room for our evening meal then down to the bar for a chat and a night cap before off for some rest before the final days golf.

Day two started with breakfast then off to the range for some before heading out onto the Lakes course for the second round of the Charlie Sifford Memorial Trophy. Also up for grabs were the usual nearest the pin and longest drive prizes.

With Keith’s massive 44 points the day before the talk was how was anyone going to overhaul such a lead with Keith only needing to play steady and maybe scoring just 30 points would be enough.

In sports it can be a detriment to your game when you start protecting a score and not just let it flow freely. It’s also hard to follow up an exceptional round with another. Day two on the Lakes course was different to the first day on the Woods, its not called the Lakes for nothing, there was plenty of water around to catch any wayward shot. Most of the water was in play off the tee and several holes also had water for your approach to the greens. It was a course which was picturesque in places and as one member voiced that he’d never played a hole which was surrounded by water, he got his wish on the Lakes.

It was a different challenge and the scoring was not as high as the first day, this time only nine players managed a score of 30 or more points. With a wining score of 36 points it was actually a great round of golf for Ian Higgins playing off a handicap of seven. It was a solid round by Ian a round which like Keith’s on day one also included five birdies. Both Ian and Keith’s haul of birdies made up more that 50% of the 18 birdies made over the weekend.

Ian’s 36 points was good enough to win day two but the Charlie Sifford is over 2 days and to go with Ian’s 36 on day two his round of 34 on day one was not enough to win the weekend but was so close. The 70 points total for Ian was only good enough for 3rd on count-back from Dave Brown who also scored a total of 70 with 35 points on both days. In 2nd place was Michael Taylor who’s 36 on Day one and 35 on day two combined for a 71 to pip Ian by a point.

With his 44 on day one, day two was almost a procession for Keith, almost is the key word because finishing the weekend on 72 points total Keith only just done it, his 2nd round of 28 points was only good for 12th on day two but he’d done enough on day one to hold on by a point from Mickey Taylor. 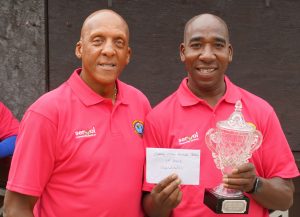 So with 72 points Keith Salmon made it a double win over the weekend by not only winning the Chairman’s Plate but also by winning the two day Charlie Sifford Memorial Trophy to round off what has been a very productive winning streak, winning the last three majors. The two wins over the weekend has now catapulted Keith up the Order of Merit table straight into 2nd place behind season long leader Chris Powell who’s now only two ahead with Eddie Wedderburn chasing them down in third another 14 points behind Keith.

All in all it was yet another successful CGS event enjoyed by all, shame about the greens but excellent Hotel and Spa.

Thanks to the committee for organising the weekend its not an easy task.

Next CGS event will be at The Staffordshire (aka Swindon). Order of merit is hotting up with two events remaining.