Eldridge Shakes up the Order at The Staffordshire 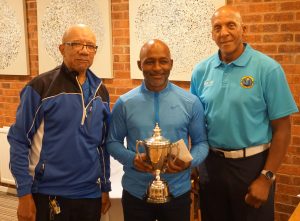 It was yet another one of those days, rain was expected but it kindly stayed away. It was at The Staffordshire or Swindon Golf Club as it was known where the CGS held its penultimate major event of the 2021 season. The prize for the winner was the TNCM trophy and in attendance was a field of 45 members and guests, with all the members vying for the TNCM Trophy and the guests hoping to to pickup a nearest the pin or longest drive prize.

So the weather didn’t quiet materialise the way the weather forecasters had predicted but they don’t always get it right. The course layout is one of those where accuracy brings its rewards, so wayward shots would be penalised severely, also being on the fairway allowed for better ball control especially hitting into some of the greens on the course which were challenging with severe slopes and undulations its a tricky course on any day.

The 3rd hole being a par 4, pretty straight tee shot required, this hole also held the longest drive challenge simply because it was straight and we could see the marker and know what to aim for. The protection for this hole was the large very undulating green and to top it the flag was positioned near the front of the green with a false front to catch this pin hunting individuals who get suckered in. This was truly a second shot hole and just getting onto the green would more than likely present a very difficult long putt from the back of the green as I’m sure this was the case for most, especially with the pin at the front. This hole was deemed the hardest on the course along with the par 4 7th and out of the field of players only three pars were made and only six pars on the 7th. It just goes to show the golf courses don’t need to be long to present a stern challenge, just need to elevate the green and add some slope to it.

Once again the CGS members done themselves proud with scoring, almost half the field scored 30 points or more with the winner posting 39 points. Winning the TNCM trophy was Eldridge Cunningham who seems to start a season very slow but halfway through his game just starts to peak and he starts posting some really good scores, this was evident last season when he won the Charlie Sifford Memorial Trophy which was the final major of the season held over two days at St Pierre, he also came close again this season for the same trophy this time held at Belton Woods in August, on that occasion second place was the best he could achieve to the on fire Keith Salmon who pretty much destroyed the field on day one, we will have to see if the trend continues. Anyway 39 points playing off an 11 handicap was enough to win by one point from a storming Paul Ramsey who’s managed to find something in his game after some poor results this season, his 38 points included a “two” on the par 3 11th. In third place with 37 points was CGS treasurer Linton Bell.

The on-course prizes of nearest the pins and longest drive were decided as follows:

Longest drive was won by George Oliver, good to see George out with the CGS again this season.

A special mention must go to the guests in attendance who were; Errol Simms, Gary Butt, Landis Brooks, Andy Linch, Sandra Lawrence, Julia Regis and Robert Gillies. It was nice to see Sandra and Julia attending, the CGS would hope that they will join next season to help promote and get more women golfers into the society, it must be said that they don’t just make up the numbers they can play too.

So with only the final major remaining and the Order of Merit title yet to be decided it was looking like the Chris Powell and Keith Salmon show however Eldridge Cunningham has just thrown his hat into the mix and as turned that show upside down. With his late season push he’s now catapulted himself to the top of the Order of Merit standing and with the Players trophy remaining at Lingdale on the 10th of October it could be any one of five players being claimed the 2021 Order of Merit champion.