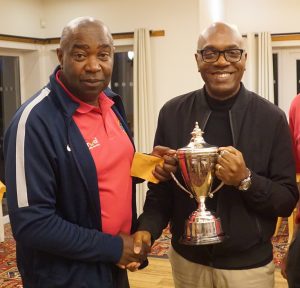 The CGS 2021 season came to a head at Lingdale Golf club with some 47 in attendance. The usual from the CGS membership were in attendance along with several from London representing the ACGA who travelled down to experience a CGS event.

The weather was great and the course in good condition, the greens looked slow but they were far from it with many firm putts ending up four or more feet pass the hole. The course was challenging and it was reflected in the scores returned.

The day was built up as the clash of the titans, with the order of merit winner yet to be decided a good score on the day from any one of five players could be enough to clinch the title, it was going down as one of the closest battles for the title in years.

The top four contenders for the title were grouped together and from the first tee shots we could see that the nerves had kicked in. In a PGA tour event were your livelihoods are on the line pressure and nerves can be seen and it was no different for our guys on the first. With a blind tee shot over a brow it wasn’t the shot you wanted to hit off the first and after several shots into the trees left, only one from the group managed to score a point. For the majority of the group it didn’t get much better with scores ranging from 32 to 25 points, however that score of 32 would prove significant when the dust settled at the end of a long day.

So whilst the championship group where out but not quite burning up the course there were others on the course creating some memorable moments for this the final event of 2021. There were shots like Lloyd Thomas scoring a birdie for five points on the stroke index one hole, the Par 5 8th where he holed a 40 yard wedge shot from the fairway. After the tee shot it was not looking like it would be birdie by the time we left for the next hole but birdie it was and for a whopping five points, unfortunately that was the highlight of Lloyd’s round.

There was also Keith Murray from the ACGA who almost holed his tee shot on the Par 3 7th . He didn’t get the one but he was close enough to make a birdie and also clinch the nearest the pin prize for his effort.

With the scores starting to come in it was clear that scoring wasn’t great but posting a score of 34 points was Roan McLeod. His score was the club house leader with all other scores entered being in the high twenties to low thirties. If Roan could hang on for the win it would be his first win in over 5 years. With the standard of golf in the CGS being so high its not easy to win an event you not only have to play well but you’ve got to hope that others on the course have an off day. Unfortunately for Roan a score of 35 came in to bump him down to second. It was Trevor Lammy who spoilt it for Roan, his score of 35 points was the deciding blow, the win gave Trevor the Players Trophy. In third spot was Chris Powell who’s 32 points was not only good enough for third spot on the day but was also good enough to clinch the 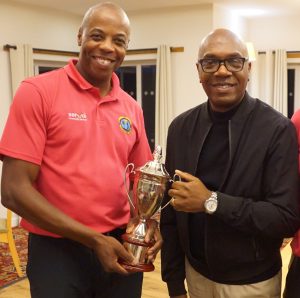 Order of Merit trophy. It was Chris who all season long was the man to beat for the title but a few stumbles along the way allowed several others into the fold but Chris showed his nerve on the final day to win the title.

After the round there was the usual banter, especially from Captain Mickey Taylor who will be standing down having represented the role for the last two years in emphatic style that only Mick can do, he will be difficult to replace it seems the role was made for him. However he’s done his stint and taking up the mantel moving up from vice-captain to captain will be Mr Eddie Wedderburn, I’m sure Eddie will put his mark on the role in 2022.

In attendance for the prize presentation representing our sponsor Servol was its CEO Philip Gayle,

Philip delivered an engaging speech on Mental Health and other services which Servol provides in communities around the country, Philip also presented the prizes to the winners.

Its been a memorable season one of the best, attendance has been one of the highest averaging well over 30 golfers. Its a big thank you to all the CGS committee members for all their efforts throughout the season, you provided us all with some excellent golf courses especially in these testing times. With winter on the horizon we can only look forward to 2022 and hopefully it will be even better.