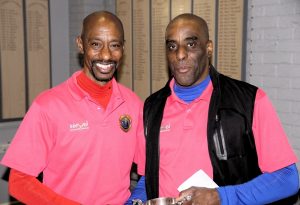 It was a cold breeze that greeted us on the car park of the Kilworth Springs Golf Club, for the first event of the CGS 2022 golf season for the Fix Up Cup.

Although the cold was a reminder that we had a way to go before the weather would warm up, It was however, warming to see all the usual faces (and some new ones) looking eager to show the work they may have been doing in the off season to improve their golf game.

Stories and jokes were shared as is the custom. Junior Harris took the obligatory practise green group picture, welcomed everyone and reminded them of some the rules, in particular, pace of play!

The practice putting surface was not the best and I’m sure all expected a better surface out on the course – unfortunately this did not turn out to be the case.

Still it was the same for everyone and some fared better on the greens than others. Having said that about the greens, the rest of the course was in reasonably good condition considering the time of year and the amount of rainfall there had been in the past couple of weeks.

The event was well attended with 39 members & guests teeing up.

On the 1st tee, some began with good tee shots and others not so good, with the odd comment of “wish I’d stayed in bed”!

One player whose name shall not be mentioned was seen taking his frustrations out on his drivers poor head cover!

It seemed that one of two groups who were using a buggy had forgotten to turn on the sat nav as a group on the 11th tee were met by a group some 3 holes out of position asking “where is the 12th tee” having already played the 14th instead of going past the clearly labelled sign showing that the 12th. tee was further on.

The usual prizes were on offer 1st, 2nd & 3rd for the overall also longest drive and nearest the pin prizes.

The top ten places saw a few of the same names but also some surprising names which will make for an interesting race for the Order of Merit trophy.

In 1st place and new to the winners circle was Noel Wright with an excellent stableford score of 42 points. Well done to Noel, especially as he was one of those who did not have the best of starts. (Ask his driver head cover)!

In 2nd place was Tony Blackwood, with 38 points. A surprise to some but not to those who knew he has a new golf coach.

In 3rd place on count back was Lloyd Thomas with 36 points.

Nearest the pin in one was Keith Salmon.

Nearest the pin in two was Allen Most.

Nearest the pin in three was Al Beckford

Well done to all the winners!

Next on the CGS calendar is the Founders Day event to be held at one of CGS most popular courses the soon to be closed Staffordshire Golf Club (formerly Swindon Golf Club) on Friday 15th April. This has been rearranged from later in the year because of the closure of the course in May.